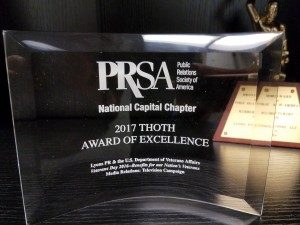 Lyons Broadcast PR was awarded The Award of Excellence from the Public Relations Society of America-National Capital Chapter during the industry organization’s 49th annual Thoth Awards.

Held at the National Press Club in Washington, DC, Lyons PR was awarded for its media relations work on behalf of the U.S. Department of Veterans and its 2016 Veterans Day Satellite Media Tour. The SMT was aimed to educate veterans and their family members about recent updates to their benefits.

Lyons PR planned and produced the two-day satellite media tour to coincide with Veterans Day 2016, a time to celebrate those who have served in the U.S. military and also a time to discuss issues impacting veterans.  The team booked nearly three dozen live and taped television and radio interviews for VA Secretary Robert McDonald and VA Deputy Secretary Sloan Gibson.

As part of the satellite media tour, the Lyons team specifically targeted broadcast outlets in regions with high veteran populations. The interviews focused on the agency’s ongoing commitment to expanding access to medical services and benefits, as well as the latest advancements for MyVA, an initiative aimed at making sure veterans know that through the VA they are getting exceptional customer service that’s easy, consistent, and memorable.

Lyons PR was among the 52 public relations firms, government agencies, nonprofit and corporate organizations located in the Washington, D.C. area who were awarded PRSA-NCC’s Thoth Awards and Awards of Excellence by an experienced panel judges.